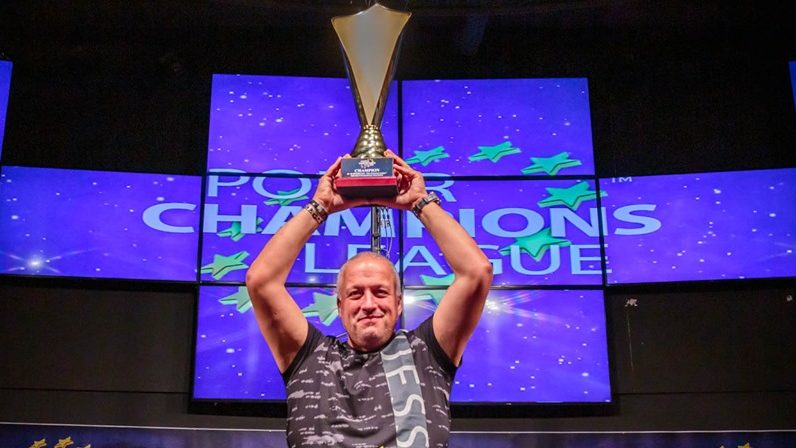 Four beautiful days of poker at Perla Resort & Entertainment in Nova Gorica and Giuseppe Caridi has finally managed to overcome the other players and take down the trophy of the single PCL – Poker Champions League™ 2019 edition.

His opponents, Marcello Miniucchi, is a renowned Italian regular who has scored more than 600 thousand dollars in his life career worth the 60th place in the Italian all-time money list, but in this occasion, he had to lower his expectations down and be happy for his runner-up.

Before getting into further details let’s get back to the beginning.

Tournament structure has been largely appreciated by both pros and amateurs and it’s not a matter of coincidences that around 41% of the field booked a seat for Day2.

Antonino Calabrò took the chip leading after the first two days, but his deep run didn’t bring him much far away. The same happened to Enrico Mosca, second in chips at the beginning of Day2 and 12th in the final count.

Day2 has been played down to 18 players and the next day, after the first two eliminations, the remaining 16 have joined an 8-handed shootout match ( with 4 survivors coming out from each table) who had to bring their stacks to the 8-handed final phase.

Elios Gualdi was the first to be eliminated: Marcello Miniucchi woke up with Jacks while his opponent shoved with 7-8 suited with his short stack.

Since this moment on, Giuseppe Caridi started building up hist stack and won every single showdown he had been engaged in.

Marco D’Angelo was the first tasting Caridi’s skills and busted flipping with 10-10 against his opponent’s K-Q. Same destiny for Jinliang Chen who moved all-in with A-7 suited and found K-8 suited with a King on the flop sending him out in 6th place.

The three-handed phase lasted for a while since Maurizio Migliorini found A-T off suited with around 15 bigs and jumped all-in against Caridi’s pair of Fours. No help for Migliorini on the board and Caridi went to the heads-up against Miniucchi with an enormous advantage in chips.

Marcello held for a few hands and eventually lost with A-3 off suited against Caridi’s Q-4 suited after being short in stack. Giuseppe Caridi can ben very happy for the second-largest score of his career as he has been awarded the only PCL – Poker Champions League™ trophy for this 2019.